Legislative Report: A Compilation of 2020 Statutes 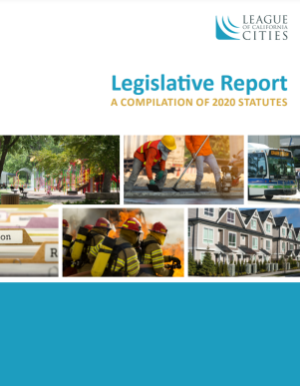 About the Legislative Report

Each year, the League of California Cities develops a comprehensive summary of the legislative year, along with descriptions, divided by issue area, of the hundreds of bills of interest to cities that passed the Legislature and were signed into law by the Governor. Dubbed the “Legislative Report,” this compilation of statutes includes chaptered bill and resolution summaries and analyses. Cal Cities prepares this document at the conclusion of each legislative year as a resource to assist city officials in understanding laws enacted during that legislative session.

The year 2020 was a year of many firsts. COVID-19 altered almost every facet of life for people around the globe, more Americans voted in the November general election than ever before, and Californians were rocked by unparalleled heatwaves, wildfires, and civil unrest. Many have called this year “unprecedented,” but even that does not seem to capture the unequaled havoc that 2020 wreaked upon us all, the California State Legislature included.

The last hours of the legislative session perfectly captured the mayhem of 2020 – a screaming newborn, a cursing legislator, and bills that died as the clock ran out. COVID19 outbreaks twice resulted in extended recesses to curb virus transmission among legislators and staff. This constricted the normal legislative calendar and created fierce debates over how to legislate during a pandemic. In the final days of official business, numerous caucuses, delays, and infighting between Senate and Assembly leadership resulted in high-profile bills failing to advance to Gov. Gavin Newsom’s desk simply because the Legislature ran out of time, as they faced a constitutional deadline of midnight on Aug. 31.