When COVID-19 shut down San Diego, it felt like the end of the city’s vibrant arts sector. Venues closed their doors, gigs dried up, wallets tightened, and an existential malaise swept through a community that lived paycheck to paycheck.

“Our social, intellectual, and professional lives can be pretty embedded in the rhythm of art exhibitions' openings,” said  Allison Wiese, an interdisciplinary performance artist and university professor. “So, the sudden loss of shared physical space was striking.” 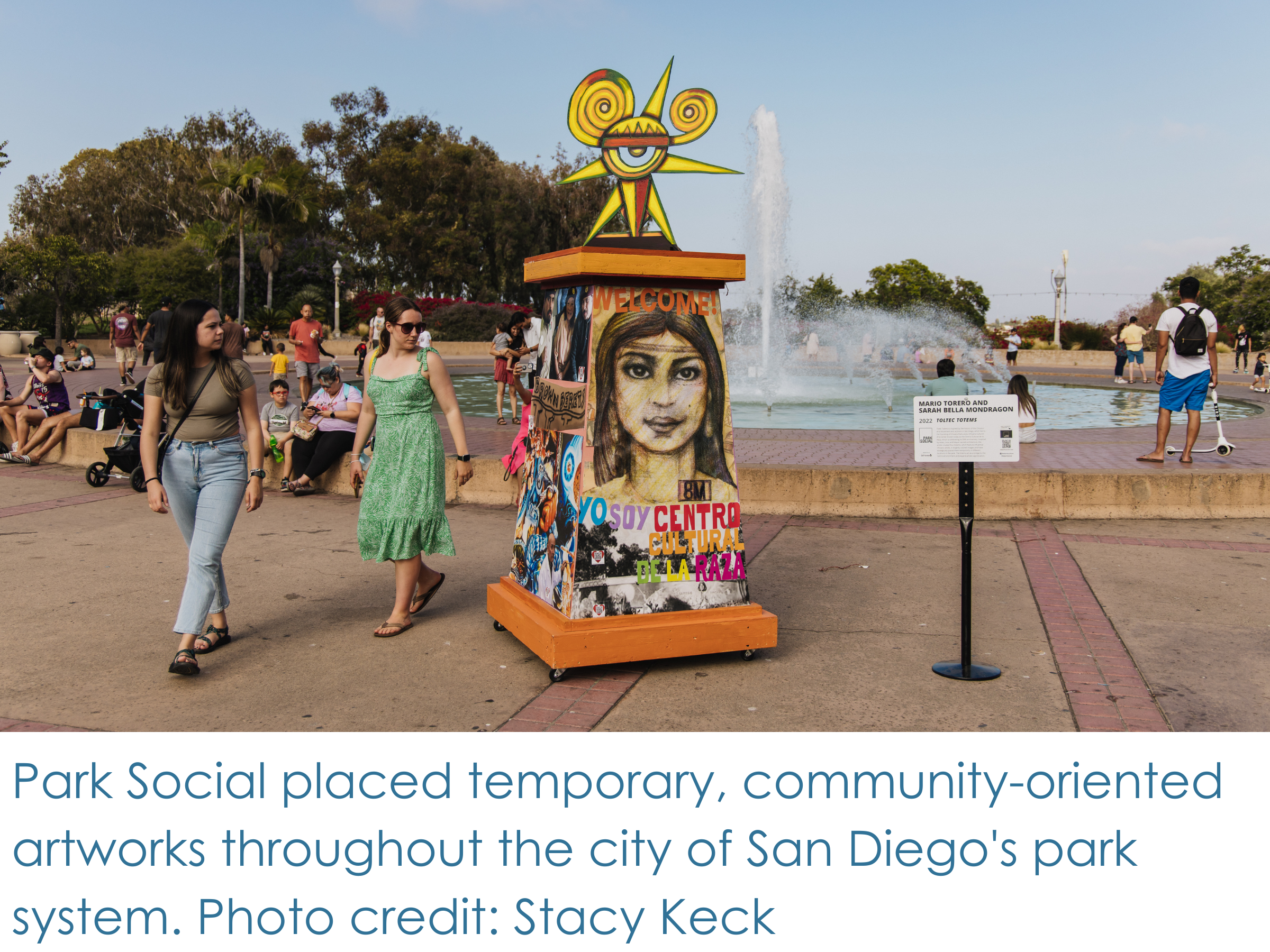 Working online was not an option for many artists. Some did not have the money or technical know-how. For others, their art requires working with or in the community. Frequently, the medium simply did not translate well to a digital environment.

“There are many meaningful forms of work, from the time-honored to the contemporary, that don't lend themselves to permanence,” Wiese said. “But many public commissioning entities haven't kept up with artists in finding ways to include ephemeral work in the programming they offer.”

For artists like Mario Torero, a Chicano artist and activist, Park Social had an immediate and positive effect on himself and the broader San Diego arts community.

Comparing himself to a hungry crocodile in a pit of starving crocodiles, Torero stated: “There’s no light. We’re crowded AND we’re [miserable]. We hope something happens. And all of a sudden … it lands: [sizzling sounds] a big piece of meat. And then the light comes through it. And we eat. And we say, ‘This is amazing. This should happen more often.’”

Places of healing and connection

Scheduled for completion on Nov. 19 and Nov. 20, Park Social is made up of short-lived, socially driven installations: the exact type of art hit hardest by the pandemic. The initiative funded 18 installations — $15,000 per project — using development fees and an anonymous bequest.

Artists were selected by a panel of art professionals, cultural practitioners, and community members. The panel paid special attention to historically underserved communities and artists struggling with the loss of gig projects.

“We’re intentional in building out our evaluation panels to make sure they are reflective of the community and the city,” said Christine E. Jones, the chief of civic art strategies for the city of San Diego. “They play a role in extending the opportunity to their networks well before convening to encourage a richly diverse group of applicants.”

Artworks were then installed in the city’s nine council districts — two per district. Since the projects were temporary, artists were able to expand the types of materials used beyond durable materials like steel and wood to impermanent materials, foods, and fabrics. 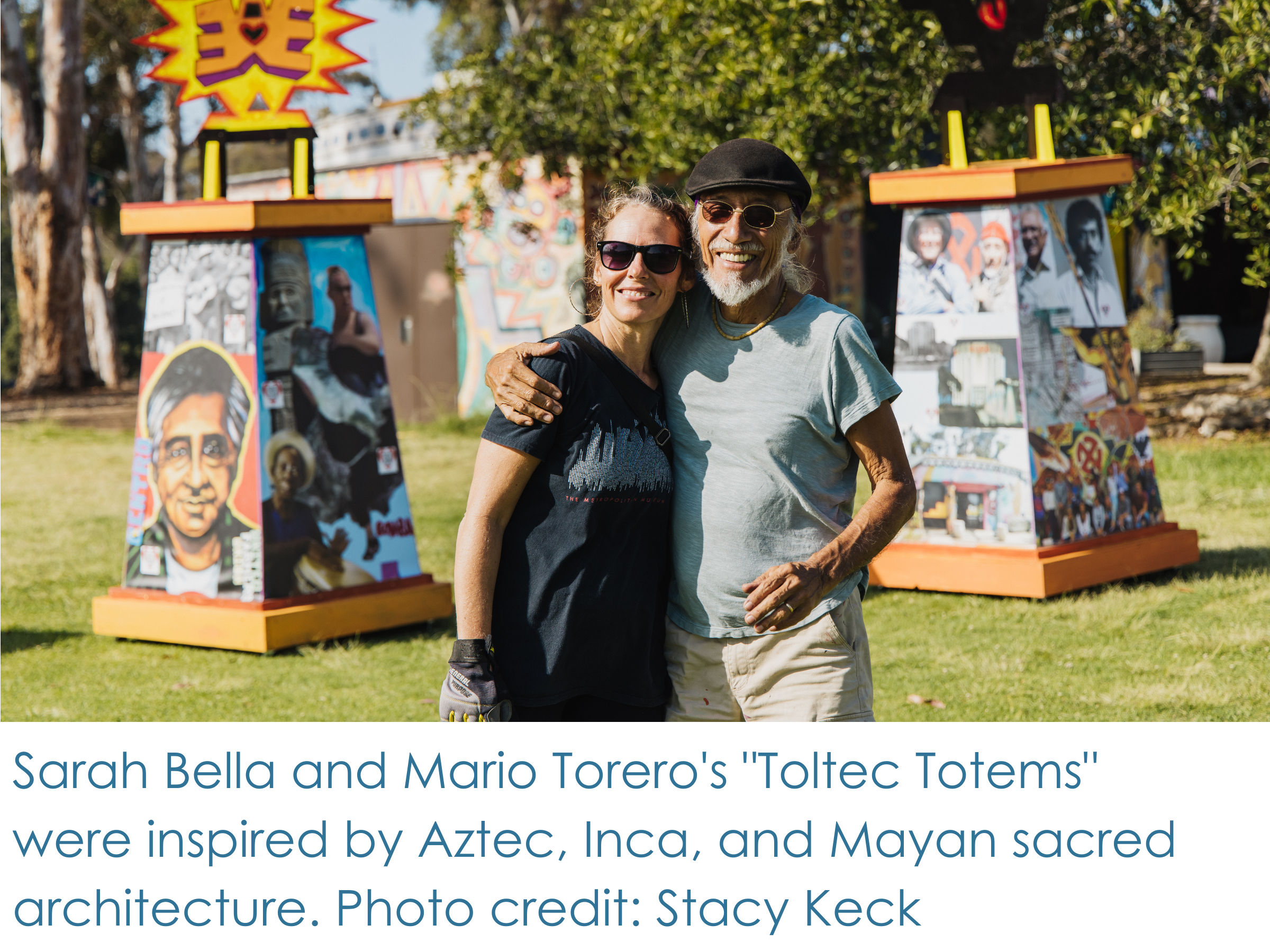 Some of the projects were created or recreated over several days, weeks, or months. Many of the installations included interactive components, such as reading, cooking, dancing, storytelling, puppetry, and music. For many, the initiative was a chance for collective healing and connection. For others, it was an opportunity to create moments of play and celebrate the surrounding community.

Torero and his longtime collaborator Sarah Bella Mondragon highlighted the area’s rich Chicano history by placing four brightly colored totems inside Balboa Park, the city’s largest park and a space frequented by tourists. The project also included dancing, music, and live painting. This allowed the artists to reach people who might not otherwise know about Chicano culture.

“Chicano is a very specific identity that still persists — as long as I’m alive anyway. We are making sure something remains behind,” Torero said.

A focus on emerging artists 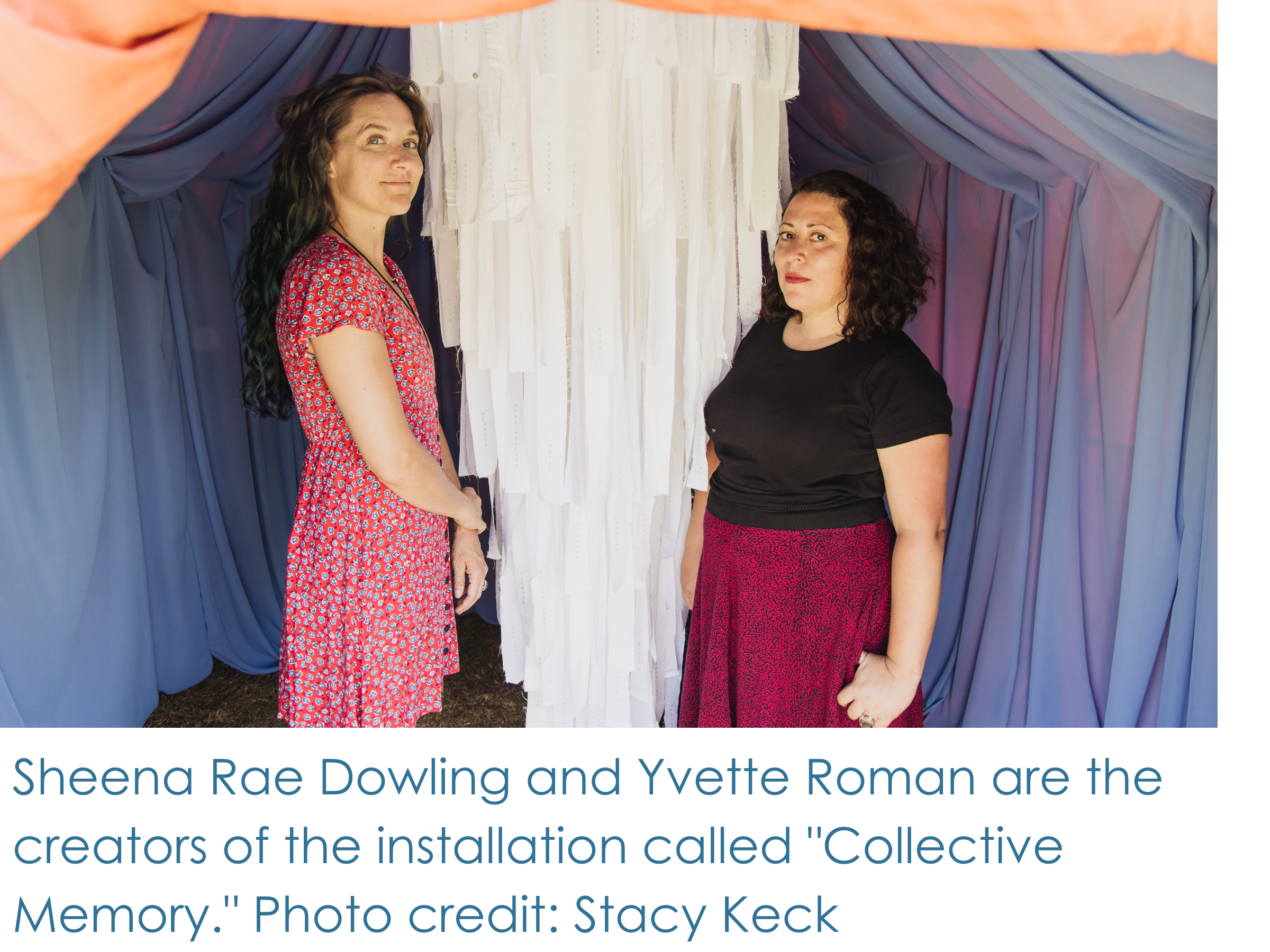 The city also provided administrative support for artists, such as how to find insurance or how to structure a final proposal. Artists can use any photos or videos created for the program for their own purposes. This was particularly beneficial for emerging artists like Sheena Rae Dowling and Yvette Roman, who were unfamiliar with these types of projects.

“The folks at the city … really helped walk us through a lot of the aspects that someone who is a seasoned public works creator would know,” Dowling said. “They were really supportive and helpful, directing us towards what we need to do.”

Park Social also gave Roman and Dowling the courage to try new things. “A lot of the things that I do now are based on that fear just disappearing, because you were faced with something so traumatic, so huge, that what’s the worst that could happen,” Roman said. “They say no … and you just move on.” 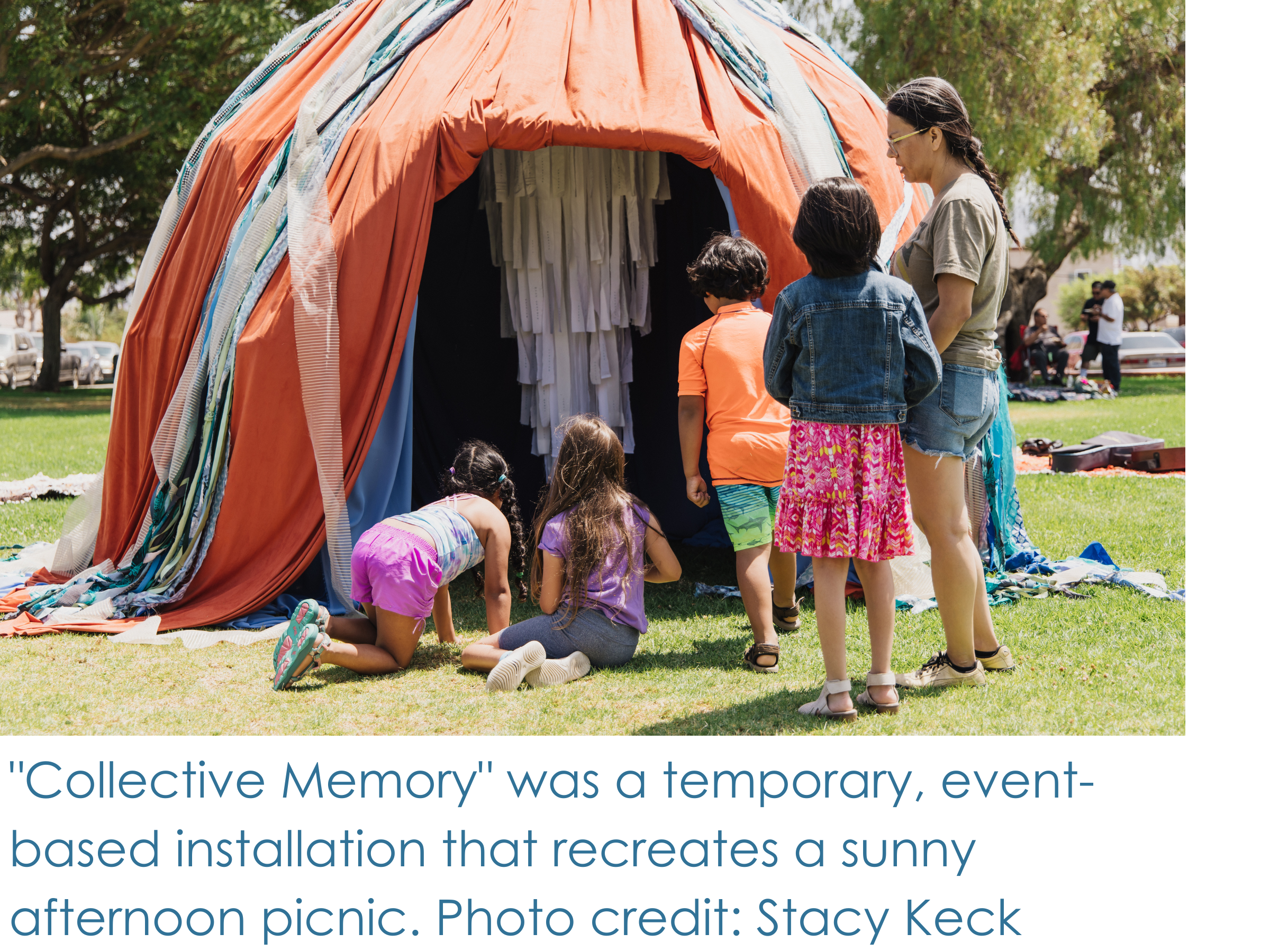 The two artists also cited the program’s therapeutic benefits. Set in a predominantly working-class, Mexican neighborhood, their installation recreated an afternoon picnic and encouraged park-goers to share their memories of the pandemic. At first, they were worried the project would not be relevant as the number of positive COVID-19 cases started to drop.

Instead, it became one of the program’s most popular installations. People used the project to unpack the fallout of pandemic-related isolation, grief, and loss. “It’s going to be relevant in the next five, ten, fifteen years. There is so much trauma there that people need to process,” Roman said.

The start of something bigger?

Initiatives like Park Social are not without their challenges. Many artists reported issues with marketing, timelines, meeting frequency, the application process, and a lack of flexibility — common problems for many large-scale, publicly-funded conceptual art programs. Regardless, each participant looked back on the project fondly.

“Collaboration is dirty. It’s got its lows. It’s got its ups. But when you’re at the end of it, you’re like: ‘Yeah. We worked through it really well,” said Kasi Muñoz, whose work focuses on art, culture, and spaces. “You can always do things better.”

Kline Swonger, who collaborated with Muñoz for Park Social, agreed. “It was an opportunity for me to grow as a communicator and as a maker,” Swonger said. “It had moments of challenge, but overall the project was very rewarding. Although we’ve done multiple collaborations in the past, this project reinforced the value of and need for engaging in the collaborative process.”

Artists were also excited about the potential long-term effects of the initiative, with all citing the desire for similar initiatives either through the city or at the community level. “There is a great thing about having an idea and completing it. And they did complete it,” Mondragon said. “You don’t always see the end effects of planting seeds.”

Artists noted that cities should not wait for another lockdown to start these types of initiatives and programs. The pandemic devasted the nation’s creative economy. According to a Johns Hopkins University report, the percentage of job losses at nonprofit arts organizations is more than three times worse than the average of all nonprofits.

Similarly, the U.S. Census Bureau found that “arts, entertainment, and recreation” businesses are among the most likely to take longer than 6 months to recover from the pandemic. The $876.7 billion industry represented 4.2% of the nation’s economy in 2020.

“The idea in and of itself … was a really lovely, brilliant idea and would be regardless of the fact that COVID was happening or not happening,” Dowling said. “They were hitting the mark of hey — people need these public spaces, these outdoor spaces, to socialize and connect and they haven’t had that for a while.”