The League of California Cities is the unifying voice of California’s cities. Together, with our members, Cal Cities delivers major victories for cities year after year – protecting local control, securing billions of dollars in the new funding, and preserving existing city resources. In just the past few years Cal Cities has scored major wins for our members:

This year, we are focused on delivering for cities by advancing our member-driven and board-approved 2021 Action Agenda.

The Guide to Local Recovery - Cal Cities created a one-stop-shop repository of information and resources for city officials looking to guide their communities through recovery from the coronavirus pandemic. In addition to a webpage, Cal Cities has been updating city officials through email alerts, webinars with federal and state agencies, and a weekly column in the Cal Cities newsletter. A collection of the entire list of updates can be found on the Cal Cities website.

Speaker Series - The Cal Cities Speakers Series is a new initiative featuring high-profile state leaders and policy experts sharing insights on timely issues, leadership, and their priorities. The series kicked off June 2 with California Natural Resources Agency Secretary Wade Crowfoot talking about drought and wildfire threats in California and what communities can do to prepare. The series is free to member cities and League Partners.

Executive order relaxing Brown Act requirements extended - Gov. Gavin Newsom granted Cal Cities' request to extend Executive Order N-29-20 past June 15, when the order was set to expire. Cal Cities and partner organizations argued that local governments needed more time to prepare for in-person public meetings while remaining in compliance with the Brown Act. The executive order provided government agencies with the necessary flexibility to conduct business meetings in a virtual format and will remain in effect through September 30, 2021.

Newsom v. Sutter County Superior Court - The Third District Court of Appeal issued a favorable decision in May, overturning a trial court ruling that questioned the validity of the executive orders cities have relied on to conduct business throughout the pandemic. Cal Cities and the California State Association of Counties filed a joint friend-of-the-court brief, urging the court to overturn the trial court ruling due to its lack of clarity and potential to subject cities and counties to legal challenges.

Bezis v. City of Livermore - The Ninth Circuit Court of Appeals issued a favorable ruling in Bezis v. City of Livermore, in which Cal Cities filed a friend-of-the-court brief in support of the City. The ruling affirmed that the city council meeting at issue in the case was a limited public forum, and therefore the Livermore city council members were empowered to interrupt a speaker to remind them to limit remarks to the agenda topic at hand without violating the First Amendment.

Landwatch Monterey County v. County of Monterey - In an unpublished decision, the California Court of Appeal for the Sixth District agreed with Cal Cities’ argument that revisions made in the county’s final Environmental Impact Report (EIR) pursuant to certain comments on the draft EIR did not constitute significant new information requiring recirculation of the final EIR.

Local streets and roads revenue estimates - Cal Cities released local streets and roads (LSR) revenue allocation estimates for the current fiscal year and upcoming budget year. The figures included Highway Users Tax Account (HUTA), as well as Road Maintenance and Rehabilitation Account (RMRA) distributions, and were based on updated estimates of state collections of fuel taxes and vehicle registration fees released by the California Department of Finance (DOF) in coordination with Gov. Gavin Newsom's revised May budget proposal.
American Rescue Plan Act - The Cal Cities-initiated grassroots alliance of local government, labor, and business formed pressured state and federal governments to provide direct and flexible funding to cities to support essential services, including police, fire, public works, permitting, and planning. Endorsed H.R. 1319 (2021), the federal Coronavirus State Local Fiscal Relief Fund with $65 billion going directly to cities and $7 billion+ for California cities. Passed by Congress; signed by President Biden on 3/11/21.
Public employees’ retirement system - Cal Cities, along with a coalition of public agency associations, opposed SB 278 (Leyva) that would require all public agencies to make unconstitutional payments to retirees who have a portion of their retirement allowance determined to be illegal by CalPERS.
Flexible COVID-19 relief - In response to growing budget shortfalls, Cal Cities issued support for the $9.6 billion COVID-19 relief package to provide urgent relief to Californians experiencing pandemic hardship, but with a call for direct and flexible funding to cities that have not received any state aid to address revenue loss.
Housing development approvals - Cal Cities opposed unless amended SB 9 (Atkins) that would require a local government to ministerially approve a housing development containing two residential units in single-family residential zones and urban lot splits, eroding local control.
Digital divide - Took support positions on broadband measures AB 14 (Aguiar-Curry) and SB 4 (Gonzalez) that seek to close the digital divide and advance broadband deployment. The bills complement Cal Cities 2021 Strategic Priorities, which seek to increase state and federal funding for broadband deployment to enhance workforce and economic development and improve quality of life.
Solid waste and recycling - Cities anticipate rates will increase in the next three years due  to new organic waste regulations and the overall cost of recycling. Cal Cities surveyed cities on solid waste and recycling rates, demonstrating the range of rate increases anticipated and which factors are contributing to the expected rate hikes.
Open and public meetings - A Cal Cities-led coalition secured a strong concession for cities when the Assembly Local Government committee scaled back the scope and impact of AB 339 (Lee), a bill that would mandate telephonic or internet-based call-in options for city councils in jurisdictions with a population above 250,000 people. Cal Cities remains opposed to the bill.
Peace officers certification - Cal Cities secured substantial amendments to SB 2 (Bradford), a public safety officer decertification bill, that addresses our concerns related to liability under the Bane Act. However, we remain concerned with the bill’s elimination of qualified immunity and the proposed officer decertification process.
Davis v. Fresno Unified School District - The California Supreme Court is poised to determine whether bond-funded lease-leaseback agreements are subject to validation statutes. Cal Cities filed an amicus letter supporting the petition for review, arguing that is important for local agencies to have the right to use the validation statutes to judicially validate bond-funded lease-leaseback agreements. Amicus brief filed January 29, 2021.

Wyatt v. City of Sacramento - The California Court of Appeal for the Third District agreed with the argument Cal Cities made in its amicus brief: Cities are not prohibited from collecting general taxes on the use of water, sewer, garbage, and other property-related services, if those taxes are approved by a majority vote. 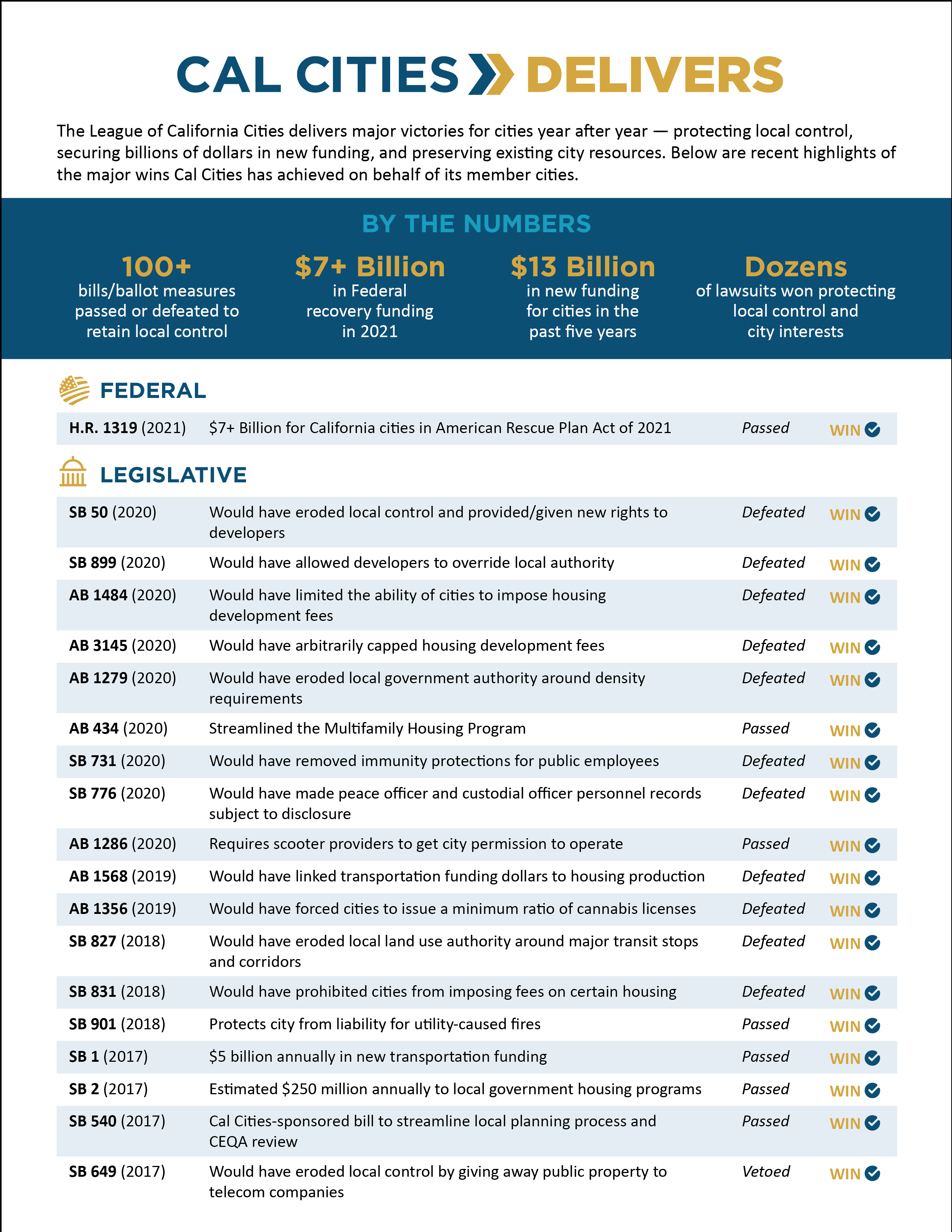 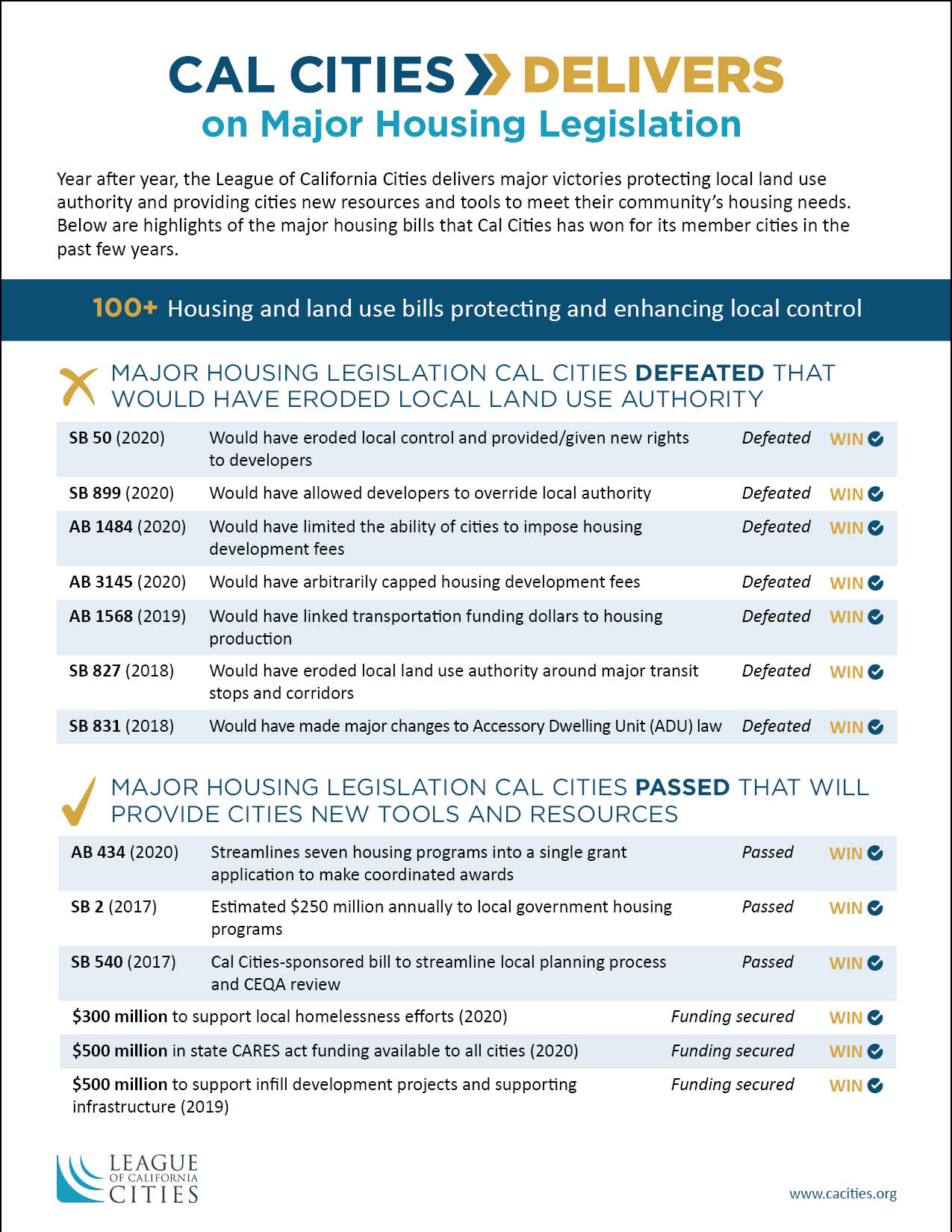 Our policy positions are entirely driven by our members – city officials like you. Through our multiple policy committees, divisions, departments, and our board, city officials drive the positions Cal Cities takes on legislation. If you aren’t already engaged, we’d love to have your voice join our efforts.