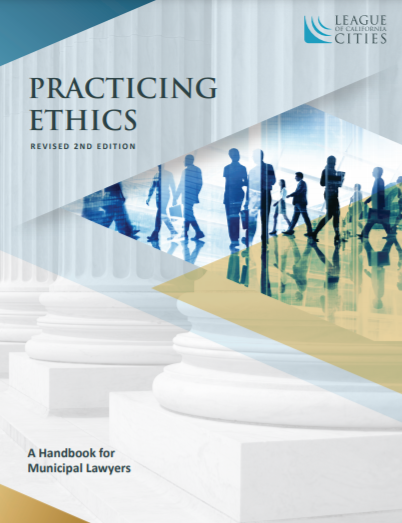 The City Attorneys’ Department first published Practicing Ethics: A Handbook for Municipal Lawyers in 2004, and then again in 2014. This Revised 2nd Edition (updated in 2020) was undertaken in response to the California State Bar’s 2018 comprehensive update of the Rules of Professional Conduct. We are grateful to Joseph Montes, who tackled this update of Practicing Ethics, as well as provided presentations to the City Attorneys’ Department on the new Rules of Professional Conduct.

The State Bar’s 2018 update process for the Rules of Professional Conduct began in 2001 (with the last update in 1992). The 2018 update includes 69 rules, based largely on the ABA Model Rules, but preserving many uniquely “California” aspects of the former rules. The new rules, of course, have been completely renumbered. In representing governmental entities, there are new rules dealing with “reporting up” issues of malfeasance, contacts between city officials and represented persons, lawyers as witnesses, ethical walls and imputation of conflicts, and responsibilities of city attorneys and supervisory attorneys for the actions of their staff.

Although the impetus to update Practicing Ethics was the State Bar’s update, the Fair Political Practices Commission (FPPC) has also updated (and renumbered) many of its regulations. The FPPC has now also issued opinions on the application of Government Code §1090. We are grateful to Rebecca Moon and Vadim Sidelnikov of the City Attorneys’ Department’s FPPC Committee who provided their insights on Chapters 3 and 4.