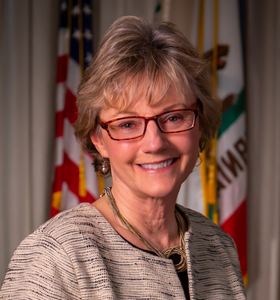 Silva has been an active member of the League of California Cities for more than a decade. She has been a member of the Cal Cities Board of Directors since 2015 and served as president of the East Bay Division in 2013. Silva has also served on a number of Cal Cities Policy Committees over the years, including Housing, Community and Economic Development; Governance, Transparency and Labor Relations; and Community Services. Silva has served on specialized Cal Cities task forces and working groups as well, including Diversity, Equity and Inclusion (2020); Governance (2020); Housing (2017, 2019); Homelessness (2016); and Strategic Initiatives (2012-13).
As mayor, Silva founded the now-annual Walnut Creek Community Service Day in 2011, which she still co-chairs. Over the years, Community Service Day amasses an average 1,200 volunteers annually, has cumulatively generated nearly 50,000 hours of volunteer service for public facilities and local non-profits, and collected nearly 80,000 pounds of food and $50,000 for the local food bank. Also as mayor, Silva spearheaded a Community Blue Ribbon Task Force on Fiscal Health and organized the city’s monthly Second Saturday Spotlight in 2013 and 2019. In her council member role, Silva has served on numerous council committees: Finance; Public Education; Housing and Community Development; Public Safety; Youth and Family Services; and several ad hoc committees including the city’s 2020-21 Economic Rebound Program and the North Downtown Specific Plan advisory committee (2016-2019).
Regionally, Silva represents Walnut Creek on the Central Contra Costa Solid Waste Authority and represents Contra Costa county on the East Bay Regional Communications System Authority. At the State level, Silva serves as a Governor-appointed member of the California Seismic Safety Commission.
A resident of Walnut Creek since 1984, Silva has been an active community volunteer for more than 30 years. Silva also has 40 years of business experience in marketing and communications in industries as diverse as telecommunications, biotech, and the non-profit sector. From 1980-2016, she owned her own consulting business.